WSJ: “Mexico Loses Its Sovereignty to Cartels” Did They Really Lose It or Did AMLO Surrender It? 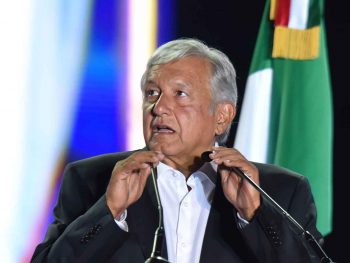 The other day there was an article in the WSJ about this. The title: “Mexico Loses Its Sovereignty to Cartels,” If they lost it means there had been some conflict, fight etc. to keep it. In the past administrations… yes… but… with the new president, Andres Manuel Lopez Obrador, often referred to as AMLO, there was no fight to keep it. He just surrendered it. His policy in dealing with the cartels is; “hugs not bullets.”

Violence in Mexico has soared in the little less than one year since AMLO became president. Why? Because the cartels see his policies as a sign of weakness and are exploiting it. The threat of consequences to their organizations no longer exists and they now operate without fear of consequences. The cartels are now the ruling authority in many parts of the country.  And just as with the Mexican characters in my Citizen Warrior Series, you don’t dare go or speak out against them.

The recent cartel ambush on American women and children traveling on a road in northern Mexico is a manifestation of AMLO’s policy. As of this writing, the Mexican authorities have yet to bring anyone to justice. My prediction is they never will. President Trump in the immediate aftermath of this tragedy offered U.S. help to AMLO… he turned it down.

The WSJ article states: “The federal police have been replaced with a new national guard, and the intelligence bureaucracy has been reinvented. Neither appears up to the job. The broader AMLO solution involves a negotiated peace, ‘transitional justice’ and an array of new social programs.” Does this all sound familiar? Remember the image of Obama in his first year as president bowing to the Saudi king? His speech in Cairo Egypt and the resultant disastrous Arab Spring? His weak kneed and pathetic “red line” in Syria? I could go on but you get the drift

On October 17th in the city of Culiacan, security officials arrested Ovidio Guzma. He is the son of the notorious and incarcerated El Chapo. The Sinaloa Cartel responded by unleashing its paramilitary army against the city of 900,000 people. The result of this forced the release of Mr. Guzman… a humiliating blow to the Mexican government.

As a writer, I look to the “what happened” that caused or will cause events to happen. Five days after this, there was a military gathering. Some 500 high-ranking officers convened for breakfast with the Secretary of Defense, Luis Cresencio Sandoval. General Carlos Gaytan Ocho gave a speech. “We feel aggrieved as Mexicans and offended as soldiers.” Was the general’s speech a subtle threat to AMLO? Is Mexico heading towards a civil war?

I’ve been traveling into Mexico for decades and understand the people and culture very well. As a whole they’re strong and passionate and will sacrifice themselves if they believe their country and the ones they love are being threatened.

In the year since AMLO took office an average of 90 people a day are being murdered in Mexico with a projected number topping 32,000. The writing is on the wall… the lid about to come off in Mexico. If the country is to regain control, the military, for better or worse, is the only solution in stopping the terrorism of the cartels.

True events and real people inspire me to continue to write the Citizen Warrior Series.  As I continue to hit the keyboard for Book 3 will the above events shape the story?  All I can tell you right now as with any writer creating a story… it’s a work in progress.
Keep Up the Good Fight!

P.S. For those of you who may travel into Mexico, be safe and keep your head on a swivel… I know I will.