“Don’t get out of the truck without taking your rifle,” Jim, the eighty-year-old rancher said turning right onto the road heading south to the border… twenty miles away.

Getting out of my truck an hour earlier while approaching the large double front doors to the ranch house a collection of carpet shoes and discarded water bottles greeted me. Jim had collected them on his property. What are carpet shoes? The cartel runners (mules) coming across with their drug or human trafficking loads put them over their shoes. Why? The carpet leaves no distinguishing marks thus they can’t be tracked. Clever little bastards.

Prior to us heading out I had lunch with Jim and his wife of forty-six years. Sue tells me how she doesn’t venture out very far from the house anymore. It’s become too dangerous. She recounts the many occasions illegals including MS13 gang members knocking on their door looking for food and water.  Their house has been broken into multiple times along with the other homes in the area.

So about two-and-a-half hours after leaving my house in Tucson I’m riding shotgun in a ranch truck.  I’m in the center of the Tucson Corridor that’s used for human and drug trafficking by the Mexican cartels. Our trek will take us into the heart and headwaters of it.

Jim’s warning to me about taking my rifle when I get out of the truck comes as no surprise.  He’ll be my guide for the next five and a half hours. I’ve reconciled with the reality that it’s just the two of us venturing into this rugged and beautiful part of the Sonoran Desert.  There’ll be no calling 911 should trouble finds us. It’s just me and Jim. I’m good with it.  Without discussing it I know he’s got my back and I’ve got his. Besides, this is his backyard, and he knows what he’s doing. I’m following his lead. A slow drip of adrenaline works its way through me.

Five minutes later we come across a Border Patrol agent pulled over in the northbound lane eating his lunch. Jim stops and thanks him and the other agents for their service. We proceed. I suppress the urge to take a picture out of respect for the man and the Border Patrol. They’re entitled to have a lunch break and I wouldn’t want someone, because of a picture, to interpret it as slacking off time. Soon the paved road we’re on turns to dirt and coming up on our right is an electronic surveillance tower which Jim stops so I can take a pic. It’s inoperable.

Further down we go and again he stops pointing to my right to a small gate on a corner of a fence line. It’s open showing a well-worn trail going up a hill and disappearing. Grabbing my rifle, I get out and look. Fresh foot prints heading in the road’s direction can’t be missed.

Driving along he continues to point out different spots and stops pointing to a small mountain top a mile or so to the west where one of his wranglers jumped a cartel spotter. The spotter ran off leaving a Satellite phone and an expensive pair of binoculars.

What the hell are Mexican cartel spotters doing inside our country? Why is our government allowing this to happen?

After another few minutes down the road he points out a ridge where on horseback he surprised four drug runners. They ran off leaving everything behind including the bundles of pot they were carrying.

Looking off to the right a flash of something catches the corner of my eye. I see nothing as I scan the lush mesquite trees and other fauna in the area. Was it a glint of sun off the lens of a binocular on the distant ridge or just a little paranoia winking at me?  Nothing wrong with a little paranoia… sometimes it can keep you alive.

Further down the road he points to the top of a mountain where a BP agent was shot five times and survived. This goes on like this until we come to the end of the road at the border. A single strand barbed wire fence stretches fourteen and a half miles through his property. Mexico is on the other the side. With rifles in hand we get out of the truck and Jim straddles the fence line. In the distance it’s easy to see the well traveled roads on the Mexican side leading up to the drop off point. 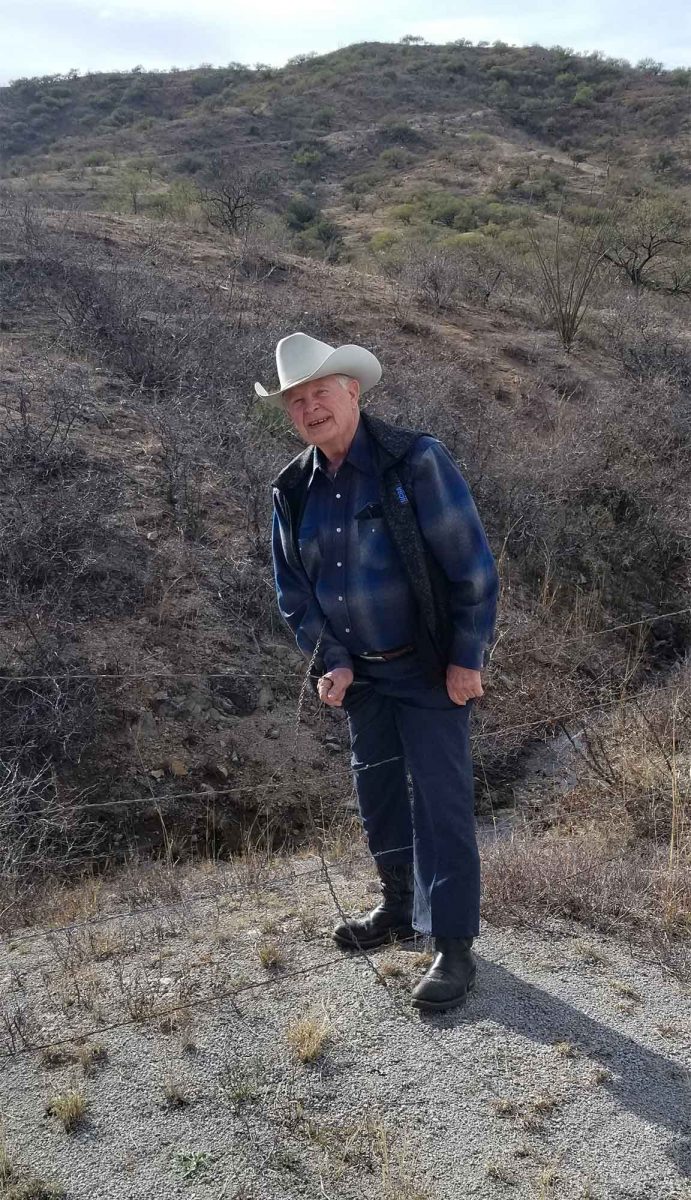 Two hours later finds us ten minutes from his house in the late afternoon as a pickup truck with a young male speeds past us heading south.

“Is he a local?” I ask Jim. “Nope. Someone on the way to pick up a load. Happens every day,” Jim says.

The whole time we were in the area I couldn’t help but get the feeling there were eyes on us. Not the whole time… just as we rounded a bend here, rounded a bend there. A quick call on a radio or cell phone to someone waiting that we’re leaving the area and they’re on their way.

Getting closer to town, Jim points out five different houses of neighbors who had been arrested. He explained to me that one third of the population were ranchers and people like he and Sue that don’t turn a blind eye to the reality of the danger zone they’re living in. Another third is of the viewpoint; see something, say nothing. The other third? They’re in business with the cartels.

The government’s failure to protect the citizens of our country inspired me to write the Citizen Warrior Series. Unfortunately, for good people like Jim and Sue, Arivaca and the Tucson Corridor is a glaring example of our government turning away from its own citizens while coddling the criminals who enter our country illegally. Our elected officials in Washington, D.C. know that this area, along with others along our southern border, are open to dangerous criminal activity and yet nothing is done about it. Our citizens living along the southern border are on their own. It’s a dereliction of duty and a disgrace on both the Republican and Democrats part.  It’s way past time to hold them to account.

Until if and when the government gets its head out of its ass and secures our southern border, it will be up to the Citizen Warriors in our country to step up.

In the meantime, I’ll keep on keeping on writing and bringing your stories inspired by true events and real people.

Reader’s Favorite 2019 Awards Ceremony for One Down!
Next Post: Trump Is the Muhammad Ali of the Oval Office