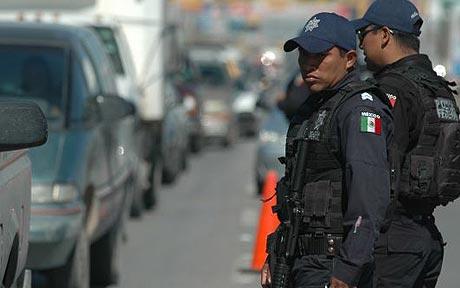 A couple of weeks ago I was traveling back from San Carlos, Mexico when we came upon a Federal Police road block just north of Hermosillo. Coming to a full stop the officer asked me He said where I was coming from and to roll the back window down so he could look inside. I answered and after his peek inside the back of my truck he waved us on. In Spanish I told him to have a nice day. He responded in kind and then as we stared to roll away he said, “God bless you!” With my head out my window looking back I said thank you and the same to him.

In a nano second I was struck by the heart of this man. It is known most in the Federal Police in Mexico are connected with the cartels. Was he on their payroll? Don’t know and frankly don’t care. What did get my attention was our connection together in that few minutes. In that moment I wasn’t a Gringo and he wasn’t a Mexican police officer with back up and guns, we were just a couple of guys exchanging pleasantry’s in the heat of the Mexican sun.

OK, here was a guy I could easily sit down and have a beer with. He probably has a family, friends and loves them all. Now, just by chance there’s a character around the same age as that guy who briefly appeared in Citizen Warrior The Fourth Branchand also is a Mexican Federal Police officer. Unknown when I started on the sequel he has become an important character on the antagonist side of the fence. While I’m inspired by true events and real people up until that moment the character I share about was conjured up from my imagination. Meeting the man at the road block has allowed me to put some “soul” into my character. Part of what’s fun about being a thriller writer, never know when an encounter like that ends up being a bit of unplanned research into character development.

DETROIT! MOVE OVER!
Next Post: Help For The Puling, Whining and Moaning!